The External Dimension of the European Union’s Migration Policy. The EU response to the migration and refugee crisis

In the last few years there have been fast and essential changes happening in the European Union (EU) regarding common policy in the field of migration and asylum. In order to manage asylum and migration in an efficient way, in all its aspects, the EU legislation has developed significantly. The progress achieved on the formation of a comprehensive, efficient and balanced migration and asylum common policy of the EU has been considerable. Yet, the remaining challenges are still numerous.

The process of shaping a common migration and asylum policy at the European Union level was a great challenge for the EU because the idea of reaching a consensus has been, and still is, hampered by some of the Union Member States, reason for which accomplishments in this domain have been slow and their results led to the shaping of some sorts of deeply fragmented policies.

The fourth edition of Eurosfat took place on May 6th 2016 under the patronage of the European Parliament, the European Commission’s Representation in Romania and the Dutch Presidency of the Council of the European Union. It was organised by Europuls.

It featured a host of panels and speakers with the aim to foster debate on EU affairs. The following takeaways come from the opening ceremony, “Is Romania ready for the EU maturity test? Bettering Romania’s European profile in the run-up to the 2019 Presidency of the Council”, and from debate number 2 on the refugee crisis, “Solving the refugee crisis: Germany’s and Romania’s policies – European solutions”.

Leadership in Times of Crisis. An analysis of the 2011 Crisis in Libya

The Libyan crisis has been regarded as a test for how the European Union (EU) manages conflicts in its immediate vicinity. United States (US) officials have said on occasion that the US is considering reducing its military presence in Europe and that European states should develop a framework for security cooperation. However, this poses many challenges. In Libya, EU states were unable to form a united front, which questions how similar crises will be answered in future.

The following paper assesses the EU leadership in the Libyan crisis. It outlines the EU’s reaction to the Arab Spring. It then emphasizes the relationship between EU states, EU institutions and international organizations, namely the United Nations (UN) and North Atlantic Treaty Organization (NATO). Lastly, I discuss the key criticisms of the EU’s response.

The Cooperation and Verification Mechanism for Romania and Bulgaria – a deeper integration mechanism or inequity?

In an attempt to trigger reform by extending EU leverage into the post-accession period, the EU had to implement a novel monitoring instrument, called The Cooperation and Verification Mechanism (CVM). But if those countries did not met the Copenhagen criteria – demanding stability of institutions guaranteeing democracy, the rule of law, human rights and respect for and protection of minorities; a functioning market economy and the ability to cope with competitive pressure and market forces within the EU; and last but not least, the ability to take on the obligations of membership, including the capacity to effectively implement the rules, standards and policies that set the body of EU law (the acquis), and adherence to the aims of political, economic and monetary union – why the EU still accepted them in the Union? Is there any possibility that EU did not have an idea about Romania and Bulgaria internal affairs and their capacity to reform? I think not. Nevertheless the EU seemed to make a snap judgment and allowed these countries in the Union hoping to keep in the straight and narrow path, which now is questionable.

INTERVIEW GRANTED BY MARIUS HÎRȚE, Director with the General Secretariat of the Council of the European Union: ”The EP represents the political discourse, while the Council has to face the realities of implementing actual policies”

Marius Hîrțe is Director with the General Secretariat of the Council of the European Union responsible for Environment, Climate Change, Education, Youth, Culture, Audiovisual and Sport and has granted an interview for the Europolity team with regard to the Council of the European Union work procedures, institutional methodology, political decision and the relation with the European Parliament under the ordinary legislative procedure. Also, a particular mindfulness was given to the role of Permanent Representatives Committee (COREPER) in the context of Council’s Presidency mandate, the influence of lobby, the cooperation between multiple working committees and the role of the professional experience detained by permanent officials in the Council. 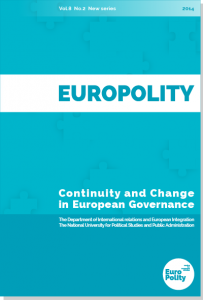